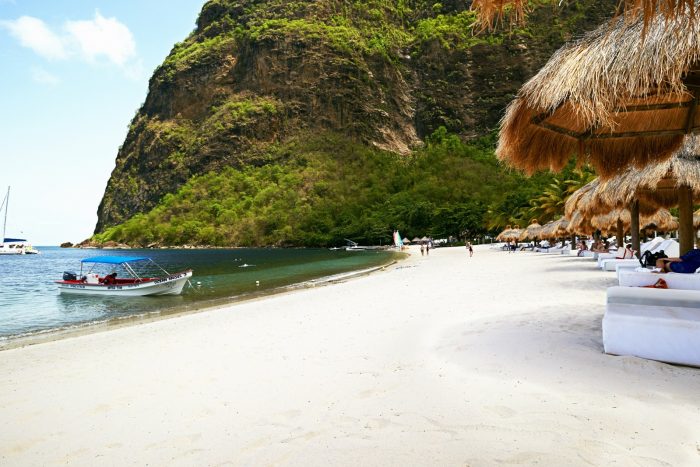 The Caribbean island of Saint Lucia is consistently warm, with fluctuating rainfall levels, resulting in a beautifully lush and vibrant landscapes with volcanoes and tropical forests. If you’re planning a visit to Saint Lucia (also known as St Lucia), then there are popular destinations and resorts all over the island. It’s worth noting that rainfall levels are typically higher on the mountains, where there are rainforests, than along the golden coastline.

Being fairly close to the equator, Saint Lucia has temperatures that don’t change much throughout the year. January and February are classed as the coldest months, with December just a little warmer, but even still have average temperatures of 26°C (just a few °C lower than in the hottest months). Average high temperatures in January and February are 29°C and 23°C respectively. The start of the year is also fairly dry, with less than 100mm of rainfall on average each month. February is notably drier than January, but in either month you’ll find that you’ll experience very little rain. Short, light showers are spread across many days, with rains just slightly heavier as you climb to higher altitudes. In December rainfall levels average a little over 100mm, but are still comparatively low.

March is the driest month of the year, with approximately 27mm of rainfall across an average of 16 days. This is also the month with the most sunshine hours. Sea temperatures are around 27°C – the same as average temperatures on land – making March an ideal month for a relaxing beach holiday or for hiking around the island enjoying the best of the weather.

In April and May, rainfall levels in Saint Lucia average just over 60mm. These months are relatively dry, with temperatures of 27-28°C on average. Average highs are 30-31°C and average lows are 24-25°C. The weather isn’t particularly notable in April or May, but this means that you’ll get to enjoy the beautiful warmth and refreshing light showers as you enjoy some of the many things to do on the island.

Between June and November, rainfall levels slowly rise from 140mm to a peak of 193mm in September, and back down again through October and November. July and August have very similar levels of rainfall, averaging 171 and 172mm. These are the wettest months in Saint Lucia, though most of the heaviest rains are in the rainforests and on the mountains, so you can typically avoid them if you want by staying on the flatter ground near the coast. Of course, the sound of the raindrops falling on the leaves of Saint Lucia’s rainforests provide a soothing and calming experience that you may not want to miss.