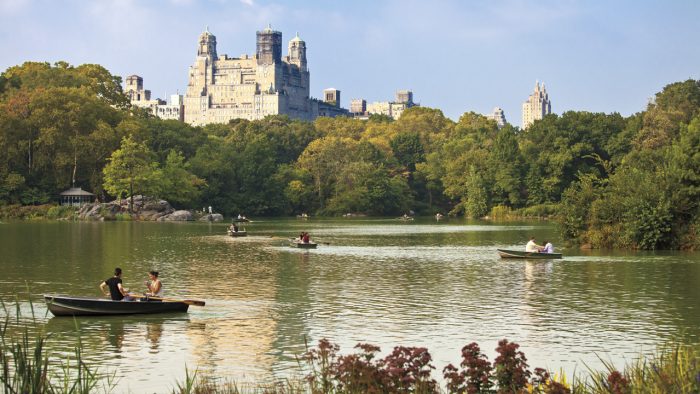 With very notable differences between winter and summer in terms of temperature, New York is worth a visit in any season. Famous landmarks and attractions such a Central Park and Times Square can be enjoyed no matter what the weather, and whilst hot summer days are tempting it can be equally as exciting to see New York City in its frosty winter glory, when the snow falls and the streets sparkle with Christmas decorations as you’ve seen them in the movies. The weather can vary from one part of New York to another – in New York City the summers are quite warm and the winters relatively mild, whilst Upstate New York can have significantly colder winters with lakes freezing over.

January and February are the two coldest months in New York, with average temperatures of 2°C. Average highs of 7°C and average lows of -3°C will mean that it’s wise to have a thick coat and a well-made pair of gloves, but whether you’re shopping or admiring the Empire State Building you’ll find that a little bit of ice won’t spoil your fun. In January rainfall levels average 85mm and in February they average 57mm, making January one of the wettest months and February the overall driest.

March is one of the colder months, though slightly warmer than the start of the year. Temperatures average 4°C in March, with an average high of 9°C and average low of 1°C. As is the case in all months, these temperatures can vary significantly from place to place. In the Albany area, 7°C temperatures are very typical, but in New York City you can expect a slightly higher usual temperature of 10°C. Lake Placid has usual March temperatures of 4°C. Rainfall levels across New York average 90mm, and are moderate.

Temperatures in New York rise in April, through May and into June, peaking in July and then dropping again through August, September and October. At their peak in July, they average 25°C. At their lowest though these months, temperatures average 11°C in April. Average highs and lows are 29°C and 20°C in July, and 16°C and 6°C in April, whilst May is the wettest month of the year with a rainfall level averaging 114mm. All of these months are amongst the wettest in New York, except for August which is significantly drier with an average rainfall level of just 87mm.

In November rainfall levels average 69mm, making it one of the driest months of the year. In December, they average 85mm. These are mild winter months, significantly warmer than the start of the year, with average temperatures of 9°C and average lows and highs of 4°C and 13°C. New York’s famous Christmas street parades can be enjoyed in above-freezing temperatures, and the conditions tend to be ideal for flurries of snow. Whether you’re ice skating at the Rockefeller Centre or admiring the fog-coated Statue of Liberty, you’re sure to have a very enjoyable winter in New York.