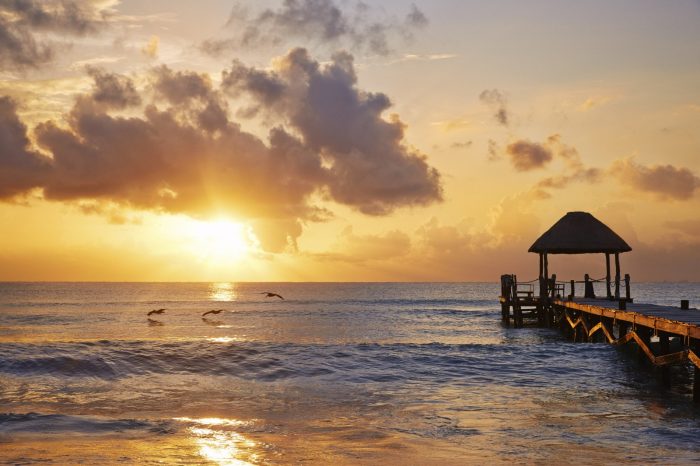 Between December and April, the weather in Mexico is amongst the year’s driest. December, January and March typically have averages of just 10mm of rain, whilst February and April have 20mm. In April, the 20mm of rain are typically spread over more than 10 days, giving short showers that shouldn’t have much impact on your holiday. Temperatures in January and February are relatively low when compared with the rest of the year, averaging 13-14°C (with average highs of 21°C and average lows of 5°C, which means that temperatures can be unpredictable and can vary considerably), whilst March sees a jump upwards and April is amongst the hottest months, at an average of 18°C with average highs and lows of 25°C and 10°C.

Between May and August, rainfall levels rise and fall. July is one of the wettest months of the year, but even still you can expect rainfall levels of approximately 60mm spread across the whole month, which means that there shouldn’t be any flash floods to worry about. Instead, you can enjoy all of Mexico’s spectacular landmarks and attractions with occasional light rain through May, June, July and August, in temperatures that go up to an average high of 25°C and down to a very comfortable average low of 12°C.

Mexico’s wettest month is September, with an average 90mm of rain. This still isn’t much at all, when you consider that a majority of days might have short showers and times when there are a few grey clouds in the sky, but in most cases you’ll still enjoy hour after hour of sunshine. September still has some of the hottest days of the year, with average temperatures of 18°C (and average highs and lows of 23°C and 12°C respectively), giving you beautiful weather in which to explore the ancient cities and pyramids, beaches and animal parks.

October and November both see an average of 20mm of rainfall, though November is very slightly cooler at 15°C (compared to 17°C averages in October). Average highs across these months are 23°C in October and 22°C in November, whilst average lows are 10°C and 7°C. November is the month with the most hours of sunshine, which means that even a slight temperature decrease and a little bit of rain shouldn’t stop you from spending long days seeing the best sights in Mexico.