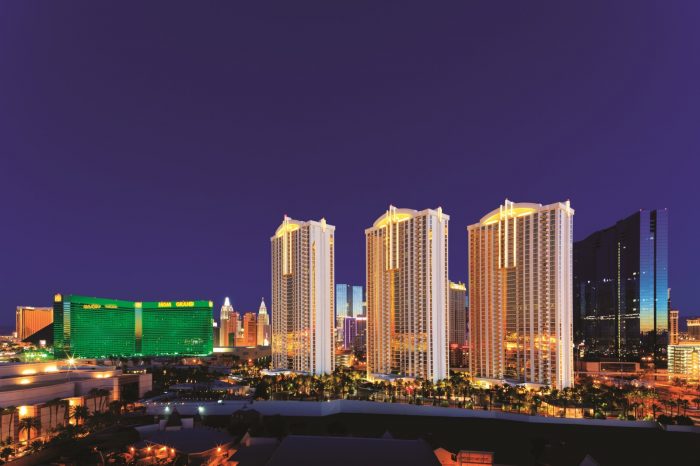 Located within the Mojave Desert, Las Vegas is surrounded by an arid mountain landscape and as a result has some very hot weather through the middle months of the year. Visit Las Vegas and you’ll find that the refreshing air conditioning, the resort swimming pool and the cocktail bars can become just a few of your favourite things, alongside the many exciting Vegas attractions that you’ll want to visit on your holiday. In fact, Las Vegas could never have become the thriving city that it is today without those abundant air conditioning systems!

November, December, January, February and March are the coldest months of the year in Las Vegas. December is the coldest of all, with temperatures averaging 8°C with average highs of 14°C and average lows of 1°C. There are many hours of sunshine through these months, and the temperatures are mild with even night-time temperatures not often reaching far below 0°C. It typically rains for just 27 days of the year in Las Vegas, and the wettest months include January and February. Even still, January only sees rainfall of 13mm in total across an average of just six days.

April, May and June are the dry months in Las Vegas, with average rainfall of just 5mm per month. Temperatures in April average 19°C (with average highs and lows of 26°C and 11°C), whilst in June the’re significantly higher at an average of 30°C, with an average high of 38°C and an average low of 23°C. These aren’t the very hottest months of the year, but they’re certainly hot enough that you’ll appreciate the many indoor attractions on offer as shelter from the sun. The hotels often have a lot to do on site, and the Fremont Street Experience is an air-conditioned entertainment and shopping complex where you can purchase some souvenirs.

July and August are both the hottest months of the year, and amongst the wettest. August is the wettest month in Las Vegas overall, with an average 14mm of rainfall across an average of 6 days. This is next to nothing, in the dry desert environment. Temperatures average 34°C in July and 33°C in August, with average highs of 41°C and average lows of 23°C. As you explore Red Rock Canyon or view the city from the Stratosphere, cooling breaks and icy drinks will enable you to make the most of your time.

Through September and October, temperatures gradually decrease from the height of the summer. Average temperatures in September are 27°C and in October are 21°C. Average highs and lows in September are 35°C and 19°C, whilst in October they’re 28°C and 12°C respectively. These months also bring moderate amounts of refreshing rain, by Las Vegas standards, with between 6mm and 8mm of rainfall. These are hot but comfortable months, during which you can enjoy the city and the surrounding rural landscapes.