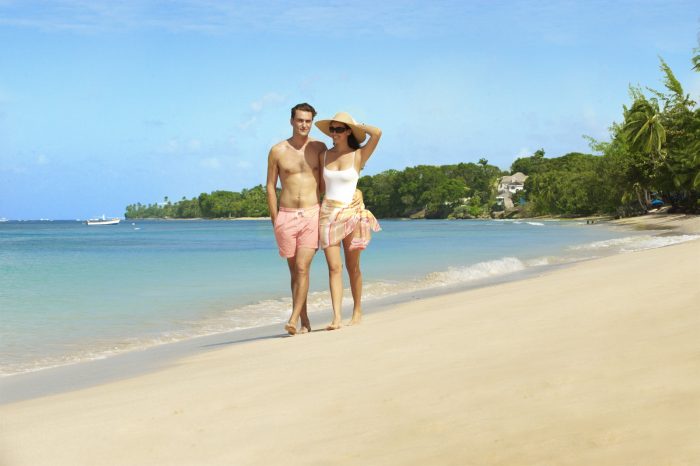 The island of Barbados is just 21 miles long and 14 miles wide, located in the Caribbean Sea. Warm temperatures are typical all through the year, with monthly averages of 25°C or more, though the weather is changeable and can fluctuate considerably from month to month. Barbados is one of the most popular Caribbean tourist destinations, and is known for its lively and vibrant culture, with its capital Bridgetown located on the South West coast of the island.

Visit Barbados between February and May and you can expect the lowest average levels of rainfall, starting at 28mm in February and slowly increasing to an average of 58mm in May. Temperatures average 26°C in February and March, and 27°C in April and May, with average highs of 29°C and average lows of 24°C, making these some of the warmest months in addition to being the driest. As a result, a visit early in the year presents the perfect opportunity for sun-seeking and for enjoying the shops, beautiful colonial buildings and sprawling beaches that Barbados is known for.

In June, expect average rainfall levels of 112mm. In July and August, levels are slightly higher at 147mm. You can expect a number of overcast or partly cloudy days, though the rainfall is typically spread over more than half of the month, so it’s relatively easy to find things to do indoors whilst the clouds quickly pass over. A gentle breeze will ensure that even with average temperatures of 27°C, with average highs and lows of 29°C and 24°C, you’ll be comfortable and not too warm.

September, October and November are the wettest months in Barbados, though rainfall is spread over more than 15 days a month so that showers very rarely last for long. In November you can expect average rainfall levels of around 206mm, with September and October having slightly lower levels. Temperatures remain high in September and October, averaging 27°C in all three months. If you’re planning to spend your time outdoors, enjoying the beaches and the street parties that Barbados is renowned for, then you’ll still be able to even in the wettest months of the year. Average highs are 29°C and average lows are 24°C, giving you warm weather for the duration of your holiday.

December and January can be considered the moderate months in Barbados, with rainfall levels averaging 97mm and 66mm across a number of short showers. Average high temperatures are 28°C and average lows are 23°C, contributing to overall averages of 26°C. Barbados has over 3,000 hours of sunshine annually, and many of these hours can be enjoyed in the months surrounding New Year. As a result, you can expect a holiday-brochure view of the island from the window of your luxury suite.