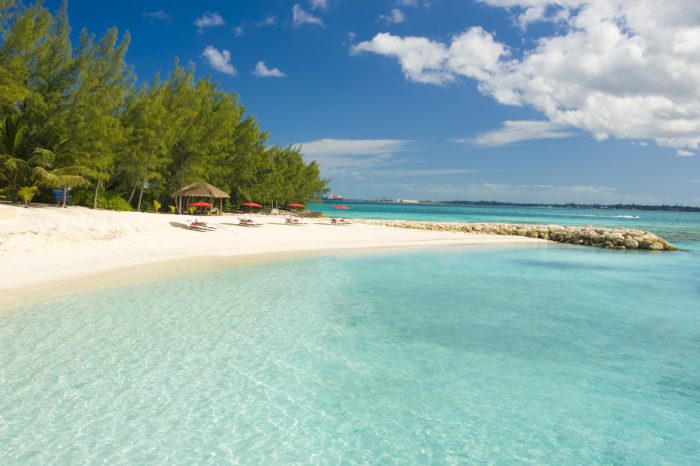 More than 700 islands make up the Bahamas, though the most popular islands for holidays are New Providence, Grand Bahama, Abaco, Eleuthera, Andros Island and Long Island. Whichever islands you travel to, you can expect comfortably warm temperatures coupled with fluctuating weather and rainfall levels. Nassau, the capital of the Bahamas, is on the island of New Providence and is one of the most popular places to visit.

The months of January to March are the driest months in the Bahamas, with rainfall levels consistently averaging 70mm across January, February and March independently. The first two months of the year are also the coldest, though averaging 21°C they’re certainly not going to leave you reaching for your thickest knitwear. Average high temperatures are 26°C in these months, and average lows are 17°C.

April is a moderate month and is therefore a very comfortable time to visit the Bahamas. Rainfall levels average 80mm and temperatures average 23°C (with average highs and lows of 27°C and 19°C respectively). There is nothing particularly notable weather-wise in April, but this makes it a great month to visit if you’re not seeking the warmest weather and don’t mind some occasional cloud cover, whilst visiting the many attractions and landmarks that you’ll want to enjoy on your holiday.

From May to September, rainfall levels rise and then gradually begin to drop again. In May you can expect an average of 180mm of rainfall, and by July the average goes up to 220mm. June has average rainfall levels of 180mm and August and September have 200mm each. Particularly in August and September, be prepared for the possibility of tropical storms. These can be magnificent to watch from the comfort of an indoor space, where you can book yourself in for a spa treatment or simply relax with a drink. Even in these wetter months, temperatures remain high averaging 28°C in July, August and September, with average highs of 32°C and average lows of 22°C, making these the hottest months of the year.

From October, through November and into December, temperatures very gradually drop from an average of 26°C to an average of 22°C, remaining warm to the end of the year. In October average highs are 30°C, and by December temperatures will be down to average lows of 18°C, which are still comfortable temperatures for a restful holiday or for the many activities that are on offer. After the higher rainfall in earlier months October, November and December are also significantly drier, with 140mm of rainfall in October and an average of just 80mm in December.