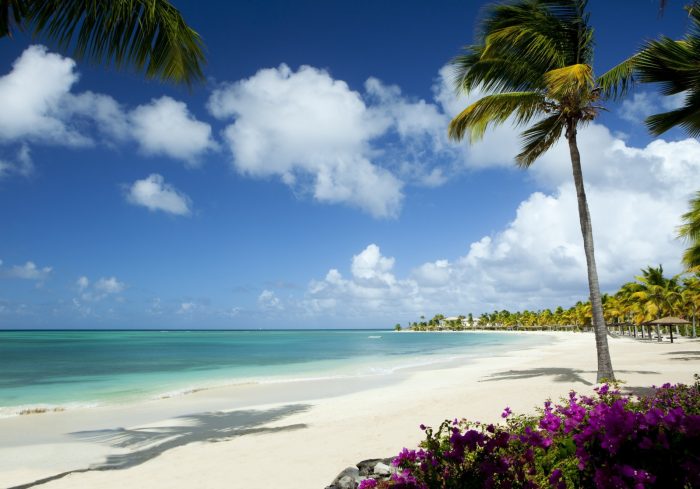 Warm throughout the year, Antigua is the perfect beach destination for a visit at any time. Temperatures are fairly consistent throughout, though the type of weather that you might expect can fluctuate a little from month to month. This Caribbean island, with a sea that’s always inviting whether you’re planning to swim or sail, is relatively dry at all times.

January is both the coldest and driest month in Antigua. Rainfall levels average just 21mm, across roughly 18 days, ensuring that you’ll never need to spend long under shelter, if any time at all! Temperatures in Antigua in January average 25°C, with average highs of 27°C and average lows of 22°C, making the warmth fairly predictable. In the water, temperatures are just as high as on land.

February has an average 41mm of rainfall, though spread across 16 days this amounts to very little noticeable wet weather. In March, rainfall levels drop again and continue to decrease to just 27mm on average in April. The temperature stays fairly level all year, and is an average 26°C in February, March and April. The average high temperature through these months is 29°C and the average low goes down to 22°C, providing temperatures that are comfortable for whatever you’re planning to do.

The months of May to November inclusive are the warmest months in Antigua, with average temperatures of 27°C in May, October and November and 28°C in June, July, August and September. Average high temperatures in June are 31°C, making this the overall hottest month of the year. In most of these months average lows are 24-25°C. If you’re planning to enjoy some scuba diving or swimming in the sea, then it may help to know that August is the month with the warmest sea temperature, averaging 29°C. Average rainfall levels are at 56mm in May, creeping progressively higher to a peak of 101mm in October, before dropping again in November. Worth noting, however, is that the rain continues to be spread over 13-18 days meaning that there are unlikely to be heavy and long-lasting rainstorms.

If you plan to visit Antigua in December then you can expect relatively moderate rainfall levels, averaging 63mm. Temperatures of around 26°C are typical, with an average high of 29°C and average low of 23°C. December might be one of Antigua’s coolest months, but it’s still perfect for drinks by the poolside and days spent splashing in the water.