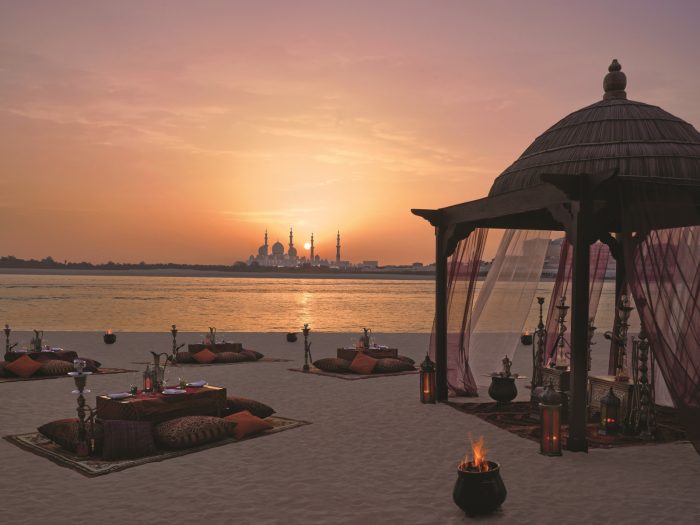 Exploring beautiful landmarks in Abu Dhabi, along with world-famous modern attractions, you’ll experience a warm and sunny holiday destination worth a visit in any month. The relatively smooth rise and fall of temperatures throughout the year will provide some predictability to your holiday booking, with only the month of February adding an interesting twist to the weather.

December and January are two of the coldest months in Abu Dhabi, but average rainfall levels through these colder months are no higher than in others. February aside, Abu Dhabi has average rainfall levels of 10mm per month. You’ll certainly have no trouble staying dry when you visit Abu Dhabi, and with temperatures averaging between 18°C and 21°C (average highs are 26°C and average lows are 12°C) you also won’t have trouble keeping warm as you spend a day on the beach or touring the attractions of Yas Island.

Whilst the rainfall in Abu Dhabi averages just 10mm per month throughout the rest of the year, February is significantly different. The rainfall doubles in January, but is still at extremely low levels. Though temperatures are higher than in January at around 20°C (with an average high of 25°C and average low of 14°C), levels of rainfall reach 20mm with a few dazzling storms that are fairly short-lived. 20mm of rain still isn’t much, and so even in February you’ll find that the weather is pleasant and that you’ll have more than enough time to visit the beach.

Between March and August, temperatures rise bit by bit from an average of 23°C (with average highs and lows of 29°C and 17°C) to an average of 36°C with an average high of 42°C and an average low of 29°C. The biggest jumps in average temperature are from March to April and from April to May, with slower rises in June and July, leading into August. These months can also be very humid, which means that you might particularly enjoy the air conditioned shops and attractions that you’ll find throughout Abu Dhabi. The months of March and August, with their moderate to high temperatures, are also perfect for time spent on the beach or in a refreshing swimming pool.

Temperatures start to drop in September, and by October the average temperature is back below 30°C (with average highs of 36°C and average lows of 22°C). This could be the perfect time to visit Abu Dhabi if you want to see all of the sights, both indoor and outdoor, without the high temperatures that might alter your plans and adjust your holiday itineraries in the early afternoon hours. Rainfall levels remain low and the sea is warm enough to swim in, making September, October and November very popular times for a holiday.